The Naturehike Hiby is a fairly lightweight and versatile 2- to 3-person, 4-season tent. It offers a bombproof structure and a large vestibule, but this is not a tent for tall people.

The tent pitches fly-first, with the poles running the full length of the tent structure through external sleeves on the flysheet.

The fact that the tent pitches fly-first also means you can pitch it in the rain without the inner getting wet – this is a major bonus for summer hiking in the Drakensberg. The inner is attached to the flysheet with toggles, which are easily removed, meaning the tent can also be used without the inner, as a quick shelter from the rain over lunchtime, or a lightweight camping option. 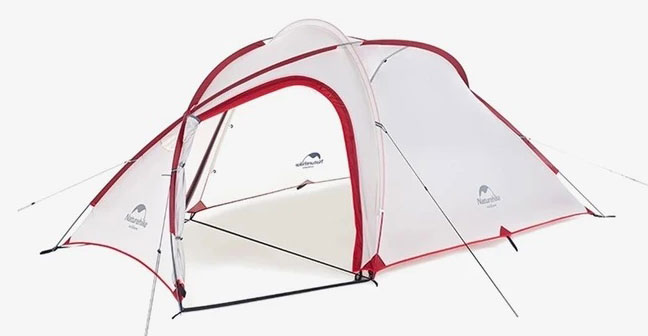 It is essentially a single-entry tent, but the vestibule opens on either side, allowing for some flexibility in the wind, or opening up entirely in warmer conditions. 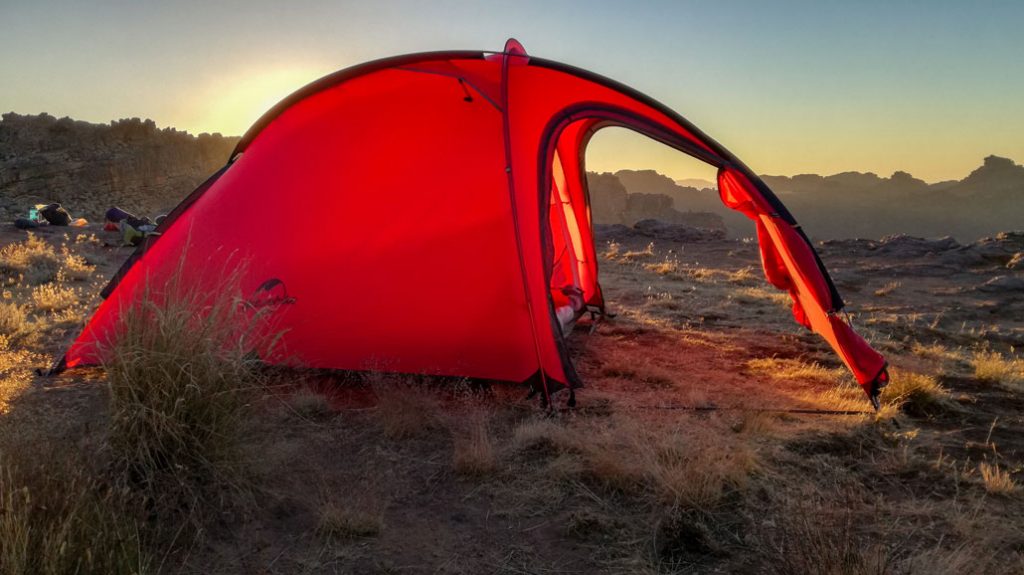 The vestibule zippers can be opened from the top, allowing for sheltered cooking while maintaining ventilation. 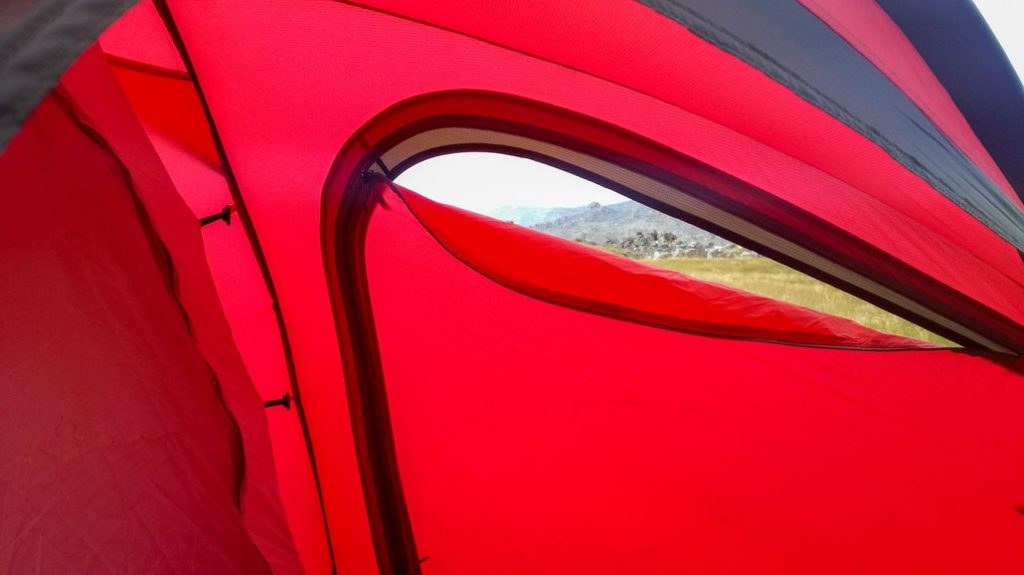 What’s in the Bag

The Hiby comes fully equipped with pegs, poles and guy ropes, as well as a groundsheet, which will add years of extra durability to the tent floor. All the elements are supplied in a neat stuff sack.

Weighing in at 2900g, the Hiby is attractively light, even as a 2-person tent, which is most likely what it will be used for due to its dimensions, but more on that later.

One of the few potentially negative aspects of this tent – pitching the Hiby is definitely a two-person job. Because the poles run the full length of the tent, they are extra-long. This, combined with the fact that they run through sleeves, makes it difficult to pitch on one’s own. I wouldn’t recommend the Hiby if you’re planning on using it is a 1-person tent.

Fortunately, the pitching time is negated by the fact that it pitches fly-first, so the inner won’t be getting wet during setup.

The inner tent walls are fabric up to about half-way and then mesh in the roof. The fabric portion does a great job at keeping drafts out and heat in, while the mesh roof allows for sufficient ventilation.

Storage is limited to 3 triangular pouches – one in the back and two in the front. However, when used as a 2-person tent, there is a fair amount of floor space left for a few bits and pieces inside the tent, but this shouldn’t ever be an issue because of the huge vestibule.

The Hiby is marketed as a 2- to 3-person tent. However, the dimensions of the tent floor limits it to three very small people. Practically, it’s more of a 2-person tent and even then, it has some limitations. I’m 1.86m tall and I was quite comfortable in the Hiby, but my head and feet were just starting to touch the ends of the tent, so anyone taller will start to feel a bit cramped when lying stretched out.

In contrast to the slightly limiting length, the tent is actually quite tall, allowing one to sit up comfortably – another important factor when trapped in your tent during bad weather.

All three air vents strategically point toward the back of the tent, allowing for maximum airflow when the tent is pitched with the vestibule facing away from the wind. 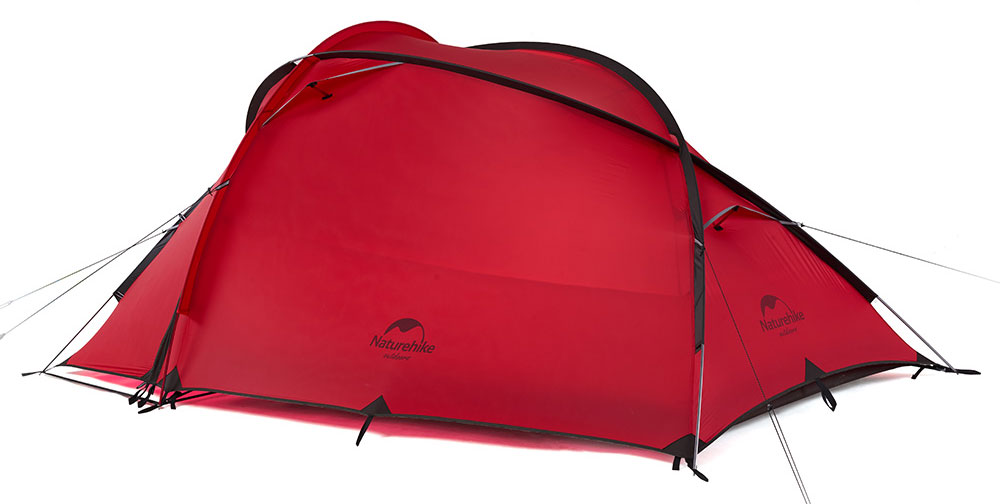 With two people sharing the tent, we experienced minimal condensation inside the flysheet, with none of it intruding into the inner tent.

While testing this tent, I only experienced medium winds and light rain. However, judging by the design and construction of the Hiby, and having used other, less sturdy Naturehike tents in hectic weather, I would gladly put money on this tent being able to handle 80km/h winds quite comfortably. The Hiby has 9 ground points, 6 guy lines and 3 poles that cross 4 times – it’s not going anywhere!

Pitched correctly, the elliptical shape of the tent further reduces wind resistance, allowing it to handle a lot more wind than most dome-style tents. 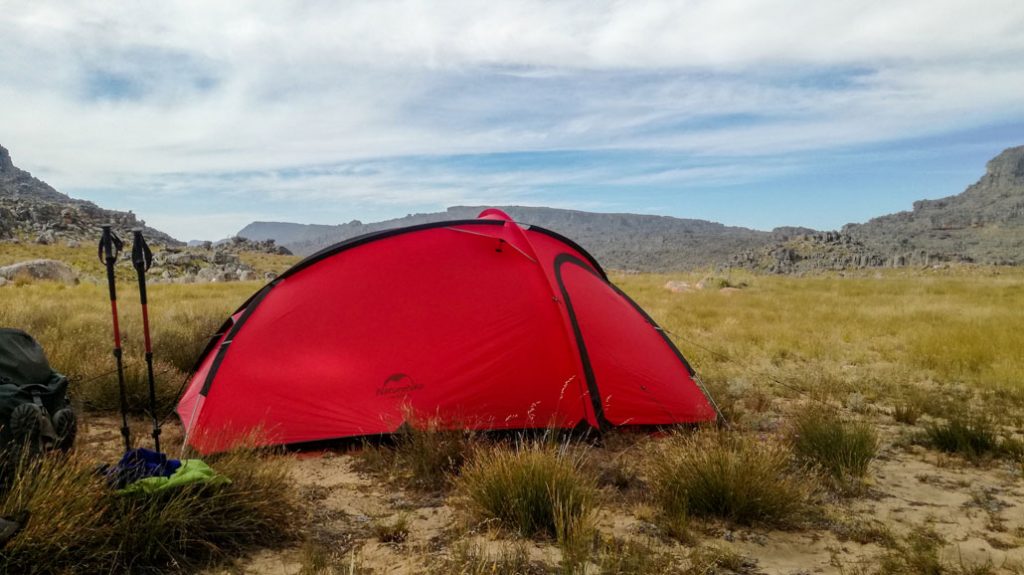 If you’re shorter than 1.86m, this tent is fantastic for 4-season use with a very liveable vestibule to comfortably sit out bad weather, or to open up on summer evenings. Fairly lightweight, bombproof and versatile. 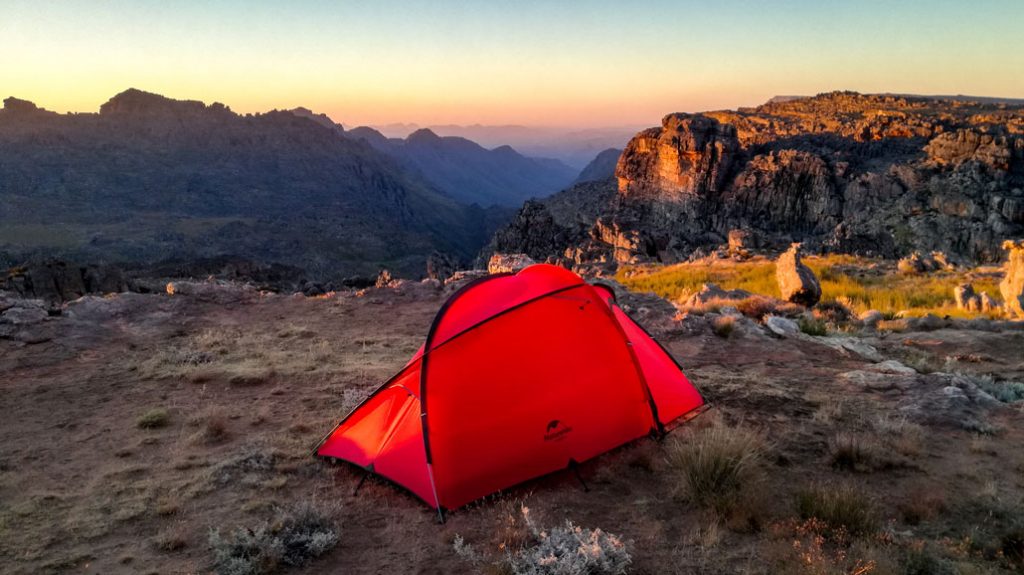 This tent was provided by Naturehike for review purposes and can be purchase from their online store.

About Arno van der Heever 43 Articles
Co-founder of Hiking South Africa, Arno loves the outdoors and finds joy in sharing it with others. He is a qualified mountain guide, a keen rock climber and has a "thing" for technical backpacks and footwear.

The Naturehike Cycling Ultralight Silicone 1-Person Tent is exactly what it says: a lightweight 1-person, 3-season tent, which, despite its cycling-specific name, is brilliant for hiking too. Key Information Price: R2399 (at time of writing) […]

Packing for an overnight hike – Part 2

During April 2008 we made our way up a dripping, slippery Corner Pass as part of a 3-day round-trip hike to Mafadi, the highest point in South Africa at 3450m. The entire Injisuthi section of […]

The First Ascent Peak is an extremely stable tent that can handle very strong winds. I had it pitched in near gale force winds where the rain was hitting the fly sheet so hard, it […] 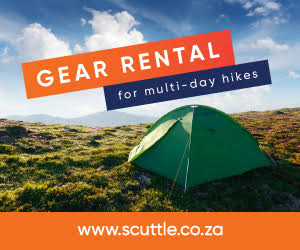